Having said that... fuck tomorrow! 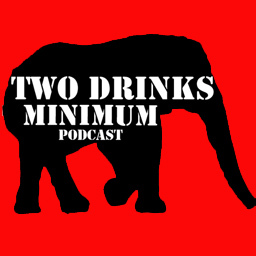 After it was all over and everyone was putting on their coats to leave, the Scarborough Dude made the mistake of glancing over at the three remaining podcasters, Rick, Jeff and Mike (don't ask me which one's which) of the Two Drinks (ha!) Minimum Podcast. Noticing that they were drinking from quart bottles, having already gone through a few pitchers, he grew increasingly curious - and thirsty. Waving goodbye to the ones who had enough good sense to head home at a reasonable hour, he pulled up a chair, took up their offer of a beer and a toke, and then....

Well, some of the conversation got recorded - but not before the Scarborough Dude bamboozled the boys with tales of his heroic past (yawn) and challenged the tall lanky one in a WHOCANTALKTHE LOUDESTTHEMOST contest - let's just call it a tie. All in all, it was just another great Live Podcaster Nite at the Imperial Pub (second Tuesday monthly). Welcome to the community, TwoDrinksMinimum.

By the way, we also recorded another great episode of Gapage (Gapage015: Perspectives) - before I got wasted.

the January 111 Live Podcaster Nite
Posted by Scarborough Dude at 10:57 AM